TU Delft spin-off Battolyser Systems will build the world’s first large Battolyser plant in the Port of Rotterdam. Annual yield: 1 gigawatt. The Netherlands has the ambition to achieve between 6-8 gigawatts of capacity by 2030, making Battolyser’s technology an important contribution to the increasing demand for green hydrogen and energy storage. The plant, which will also serve as Battolyser Systems’ headquarters and R&D center, will open in the second half of 2024.

The Battolyser factory is being developed in the M4H area, an industrial area in the heart of Rotterdam. The development costs of the 14,000 m2 production facility, complete with office and laboratories, have been estimated at €100 million. When fully operational, some 700 direct employees will be needed and it will create another four times as many indirect jobs at suppliers.

“Battolyser Systems and the Port of Rotterdam will jointly realise the first industrial production facility for green hydrogen equipment in the Netherlands,” says Mattijs Slee, CEO of Battolyser Systems. “With the Dutch potential for offshore wind energy, our strong infrastructure and our world-leading chemical industry, the Netherlands can now develop a sustainable and resilient energy system.”

“The collaboration with the Port of Rotterdam for the development of our first large production facility is a major step forward in our commercialisation,” says Slee. “Thanks to this factory, we can supply Battolysers on an industrial scale and at affordable prices. We are having good discussions with the Dutch government and EU institutions and are confident that together we can secure the necessary funding.” Next year, the final decision on the investment will be made.

“Rotterdam is positioning itself as the hydrogen hub of Europe,” says Allard Castelein, CEO of the Port of Rotterdam. “New sustainable industries contribute to the transition that is taking place in Rotterdam. We need companies like Battolyser Systems and are convinced that the port is the ideal place for their first large factory.” 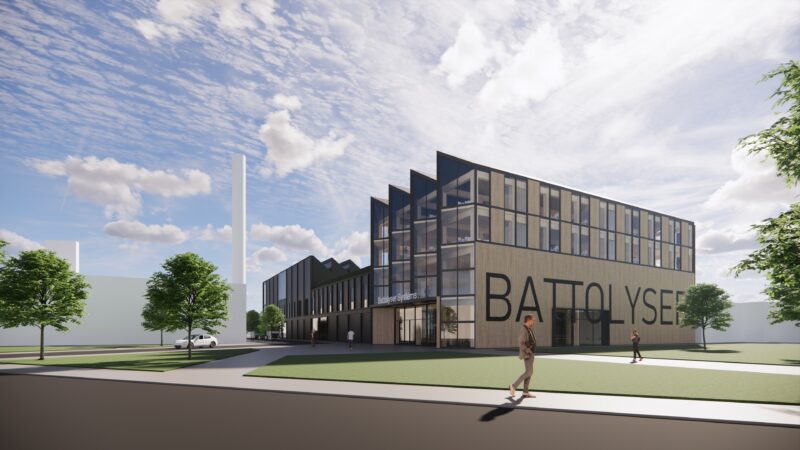 Battolyser has developed and realised the world’s first integrated battery electrolysis system. A Battolyser can produce hydrogen from the sun and wind at low electricity prices and supply electricity to the grid at high prices. The system is extremely flexible, efficient and robust. It prevents grid congestion, enables further developments in the field of solar and wind energy and offers the cheapest green hydrogen. The Battolyser technology can be applied on a large scale thanks to the use of abundantly available and conflict-free raw materials: nickel and iron. The technology of the Delft Enterprises portfolio company was invented by Prof. Fokko Mulder and his research team at TU Delft.

We previously wrote a story about Battolyser Systems, which you can read here.