“We can do anything that flies”

“We can do anything that flies”

Unmanned Valley is fully operational. Since its opening two years ago, 18 companies have established premises at the field lab for sensor-related technologies and applications located at the former air base near Katwijk. With a 25-hectare outdoor flightbox, an indoor drone centre, and 6,000 square metres of office space, the field lab offers unique testing facilities for companies and research and knowledge institutions who work on developing innovative unmanned systems.

“This drone taxi should be flying in three weeks,” says Frits Groen of the MBO College Airport, pointing to a frame of shiny black tubes. The scale model next to it reveals what the flying taxi will look like. It will be able to carry 130 kilogrammes, and eight motors with propellers and four batteries will provide the thrust. The taxi is first being tested indoors, in the hangar. “Five students are working on this,” says Groen.

The drone-building programme at the MBO College is a hit, and if you wander around the classroom at Unmanned Valley – which is also a practical lab – you will understand why. A few students are busy, surrounded by a broken drone (“donated as a repair project”), a cupboard full of professional drones, 3D printers, and cupboards with cables, LED lights and computer screens. “The boys even come here on their days off,” says Groen.

The programme has been running for a year now and started with 20 students. Next year, double that number is expected. It is a sign of the rapid growth of the industry and the force of attraction of this new innovative technology. “We have only just started, which is saying something,” says Groen.

Unmanned Valley is located in a former navy building for aircraft maintenance, which has been renovated by the Central Government Real Estate Agency with respect for the building’s architectural heritage. Thick steel doors lead to the former paint shop, which now houses a conference room. The building is self-sufficient, explains community manager Dietmar Lander, with a futuristic wind turbine on the roof. There are also two 5G antennas belonging to Do IoT, another TU Delft field lab with which UMV cooperates closely. 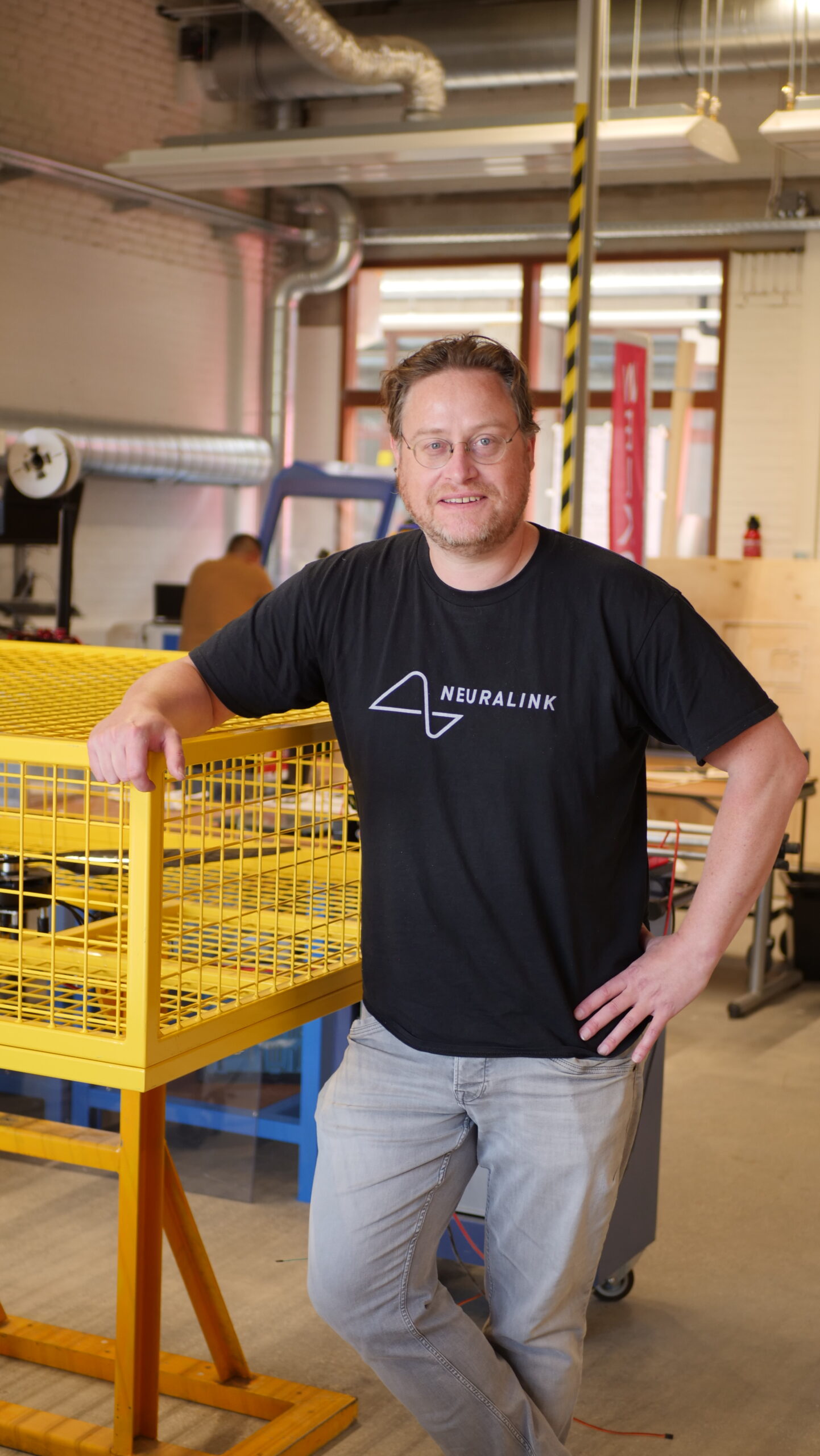 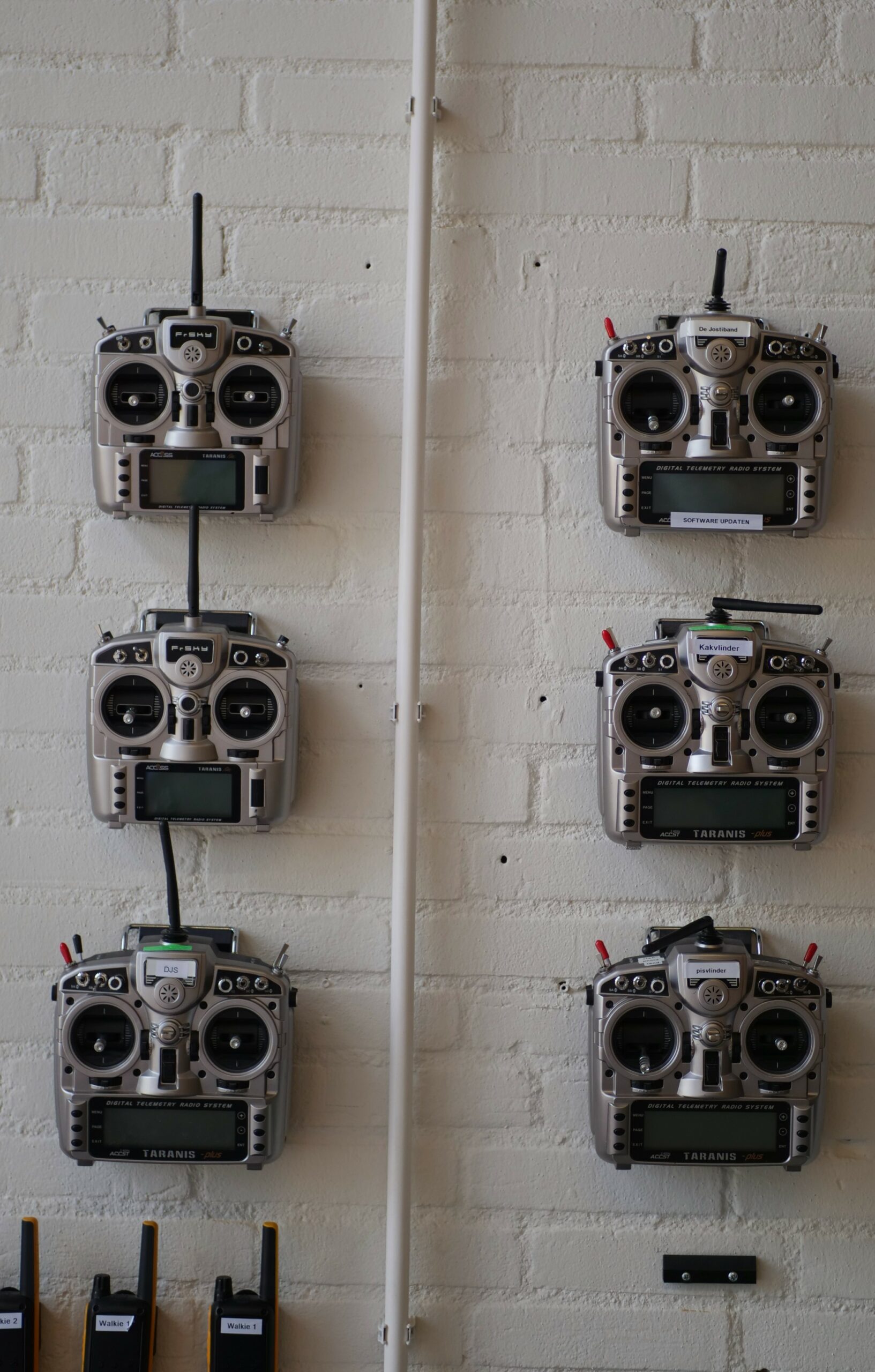 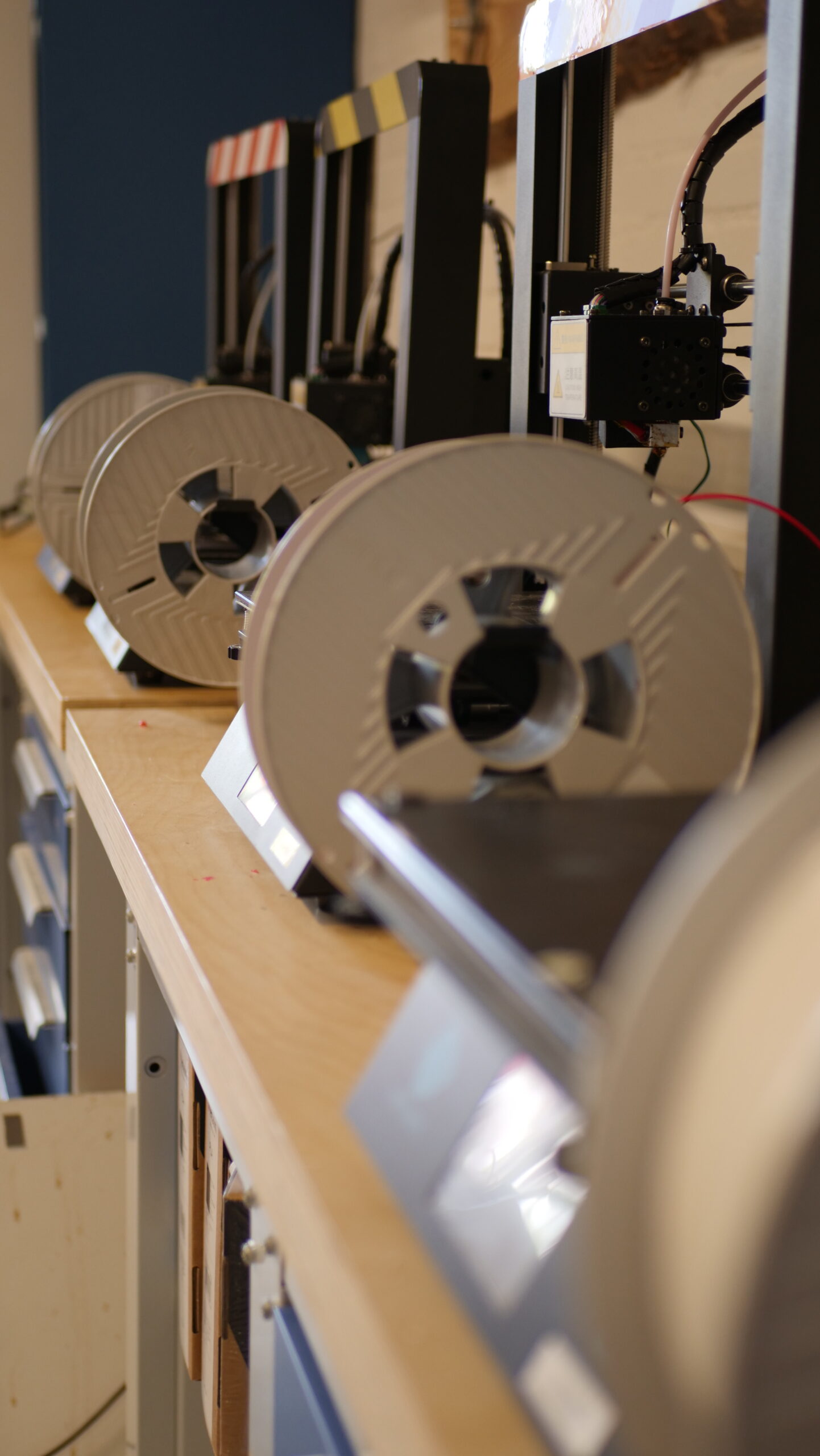 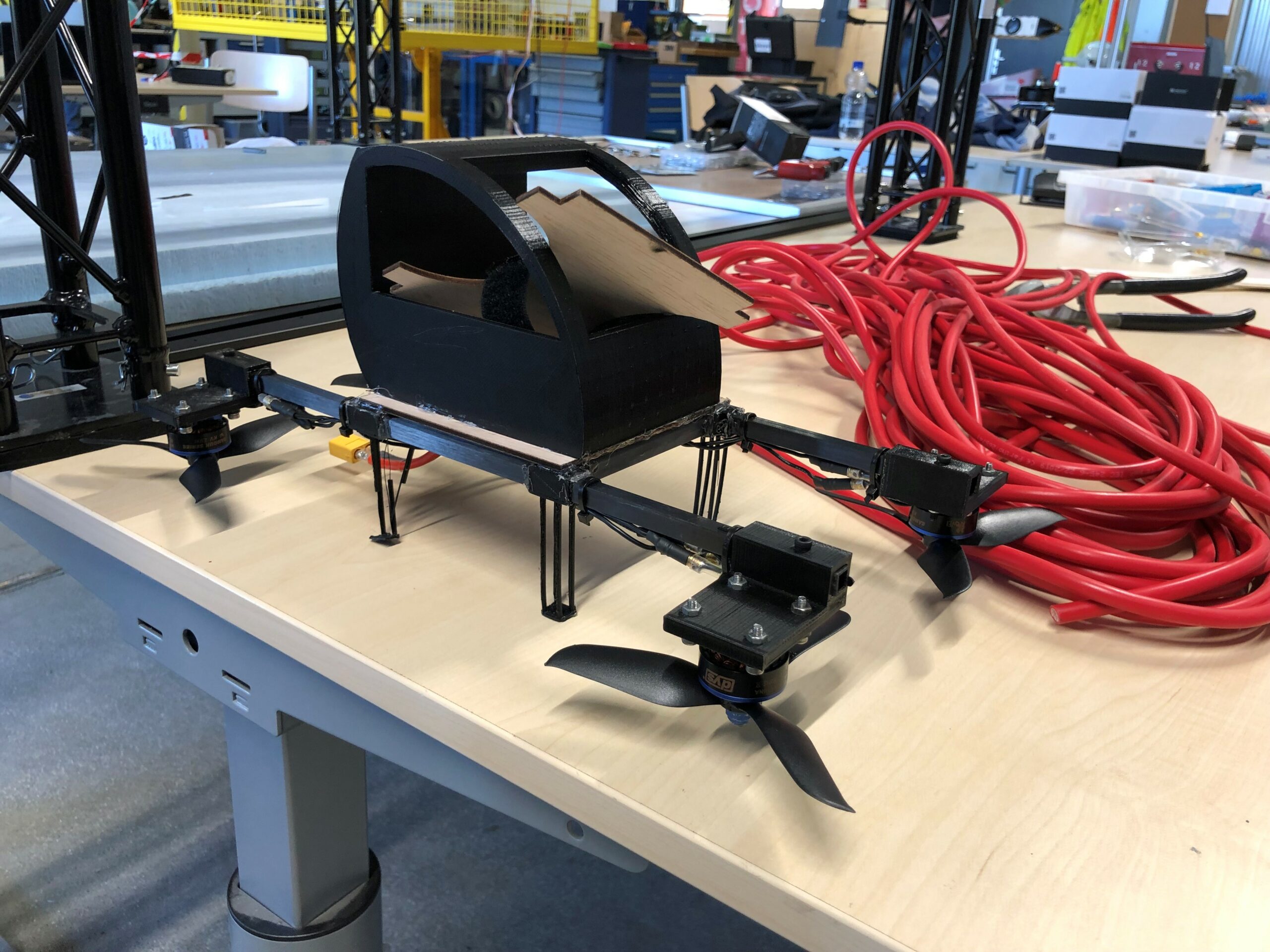 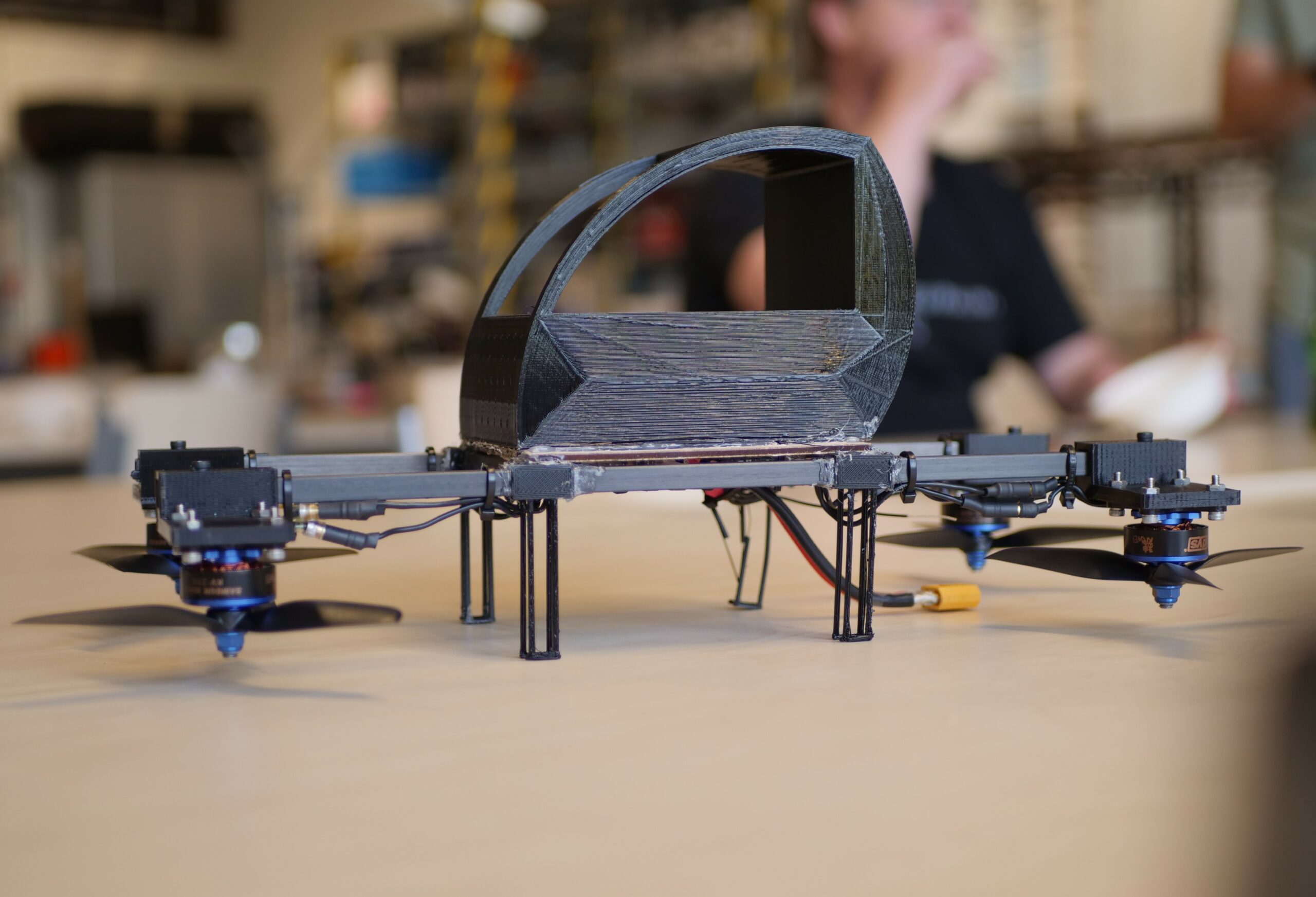 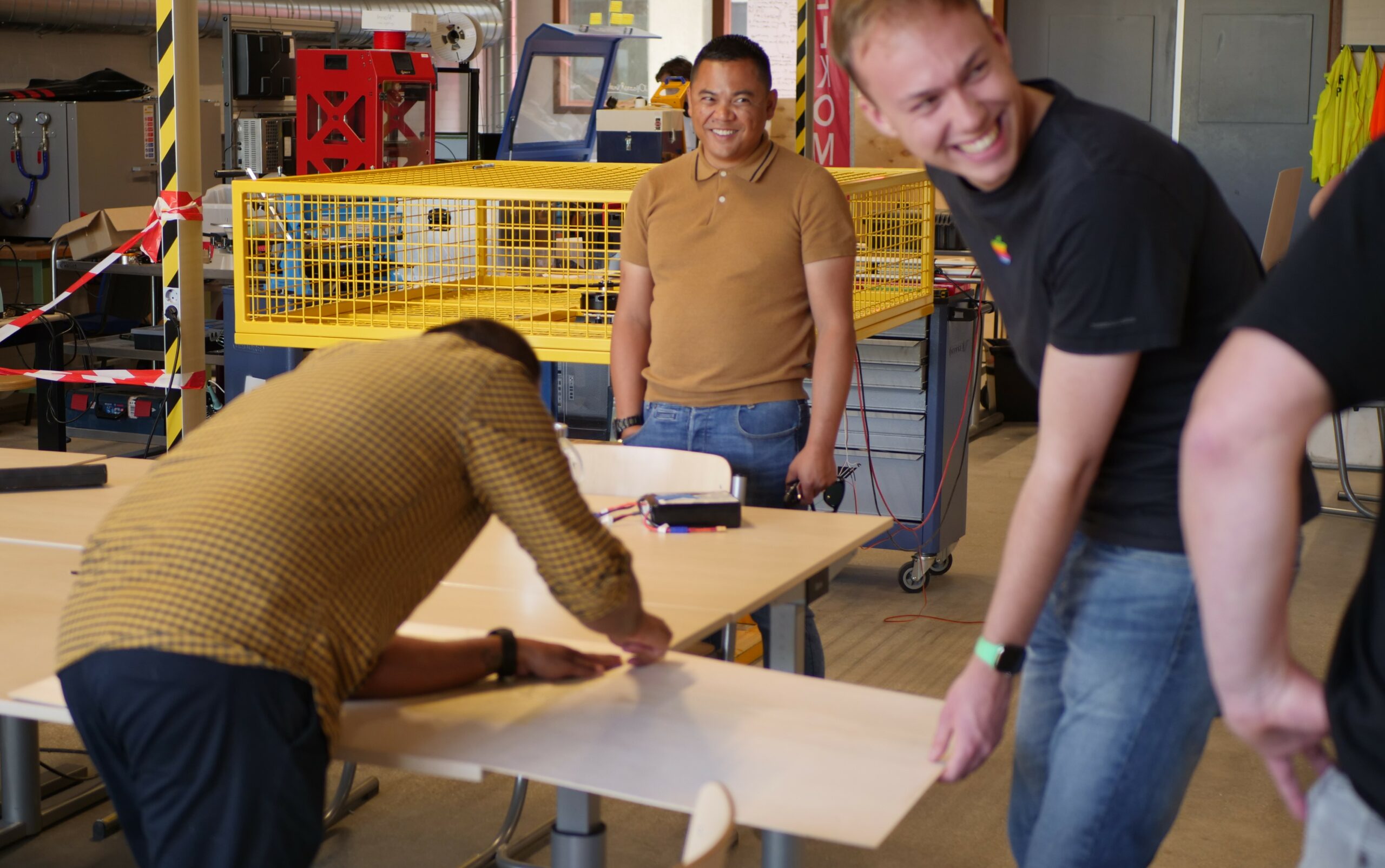 A few corridors away, project manager Walter Kort stands in the brand-new makerspace. Here too, there are workbenches, advanced equipment and tools. “We offer facilities to both start-ups and established companies that don’t have production capacity themselves.” The first innovation that saw the light of day here was ‘project X’, a prestigious assignment for NATO and Boeing involving flying drones in inhospitable areas.

The Makerspace is one of the many places where UMV users can meet. “That’s the great thing about it: you bump into each other all over the place,” says De Kort. Lander recently started as community manager to steer this process in the right direction. UMV wants to activate its network as much as possible with hackathons, knowledge sessions and other activities and so become more innovative.

The strategy behind Unmanned Valley’s success is that it makes what it does visible, says director Theo de Vries. “If you make it tangible, people will see it.” He has done this successfully in recent years with the help of TU Delft and the municipality of Katwijk, who jointly initiated the field lab. TU Delft has contributed much administrative expertise to the project.

Of course, its researchers are regular customers too. “The Micro Air Vehicle Lab of the Faculty of Aerospace Engineering tests a lot here,” says De Vries. The MAVLab has a high academic standing. Thanks to Unmanned Valley, TU Delft now has a fine test site in the middle of the Randstad conurbation. This is crucial to be able to stay at the forefront of innovation in robotics, 5G, the Internet of Things and unmanned systems. 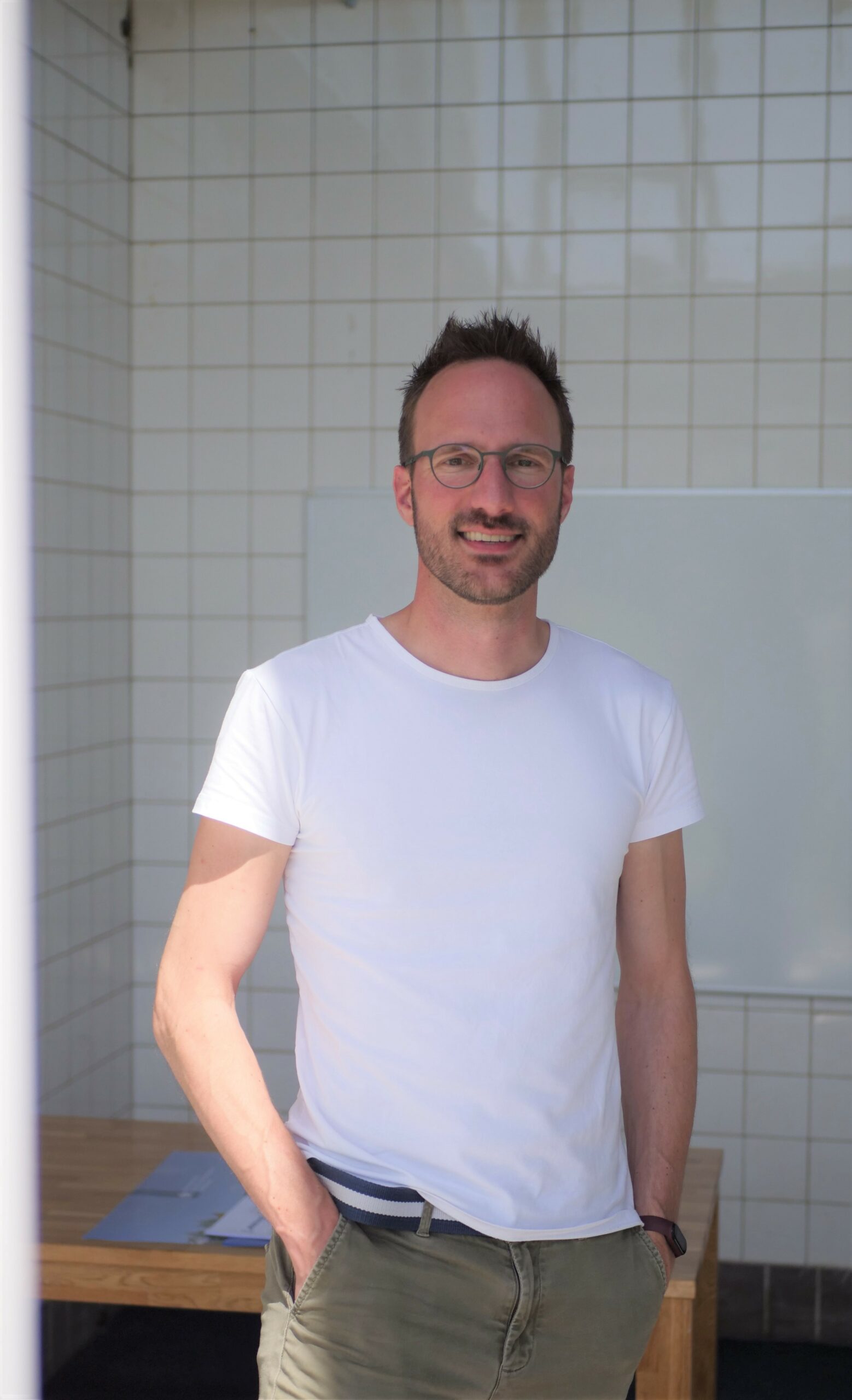 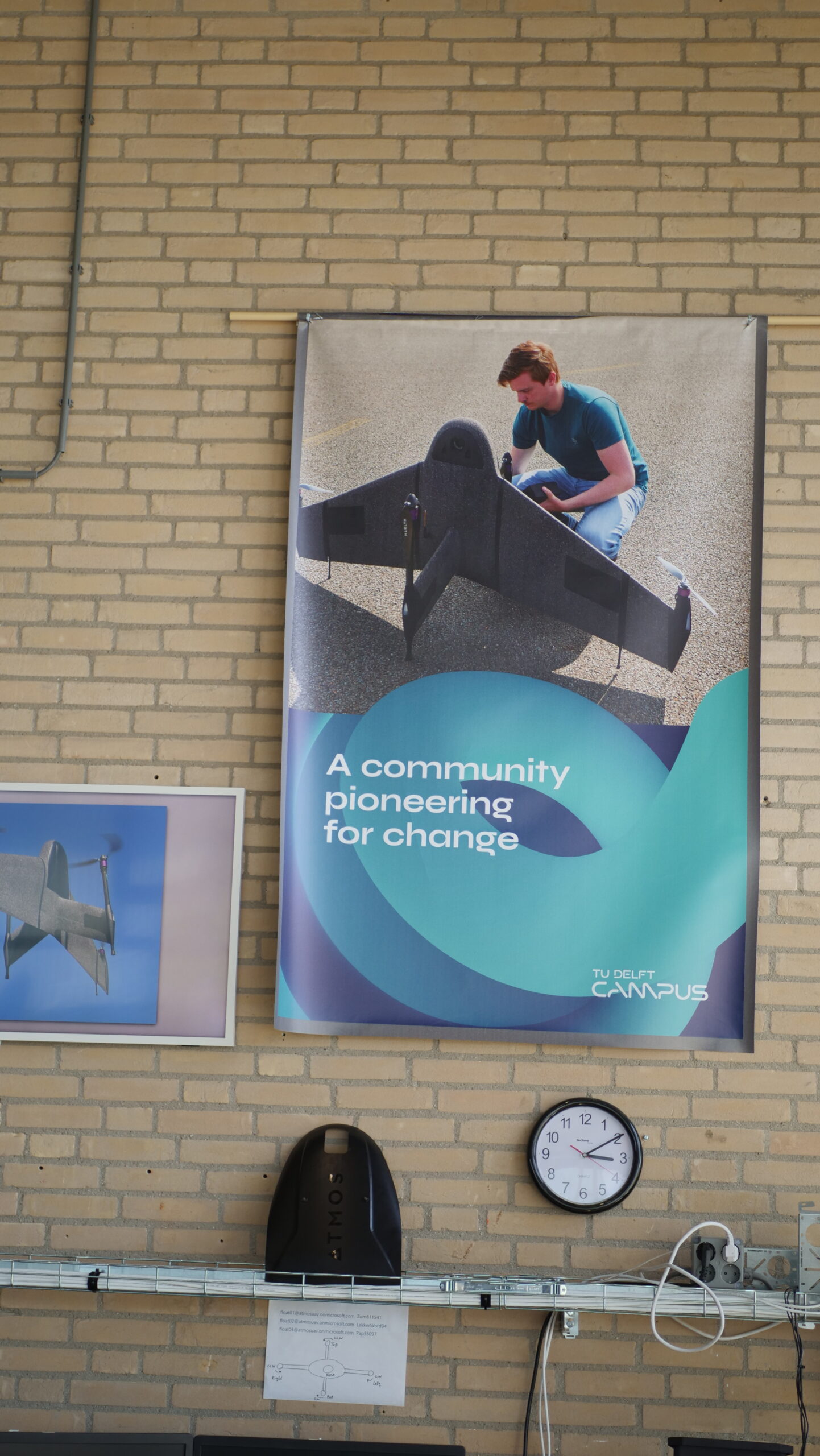 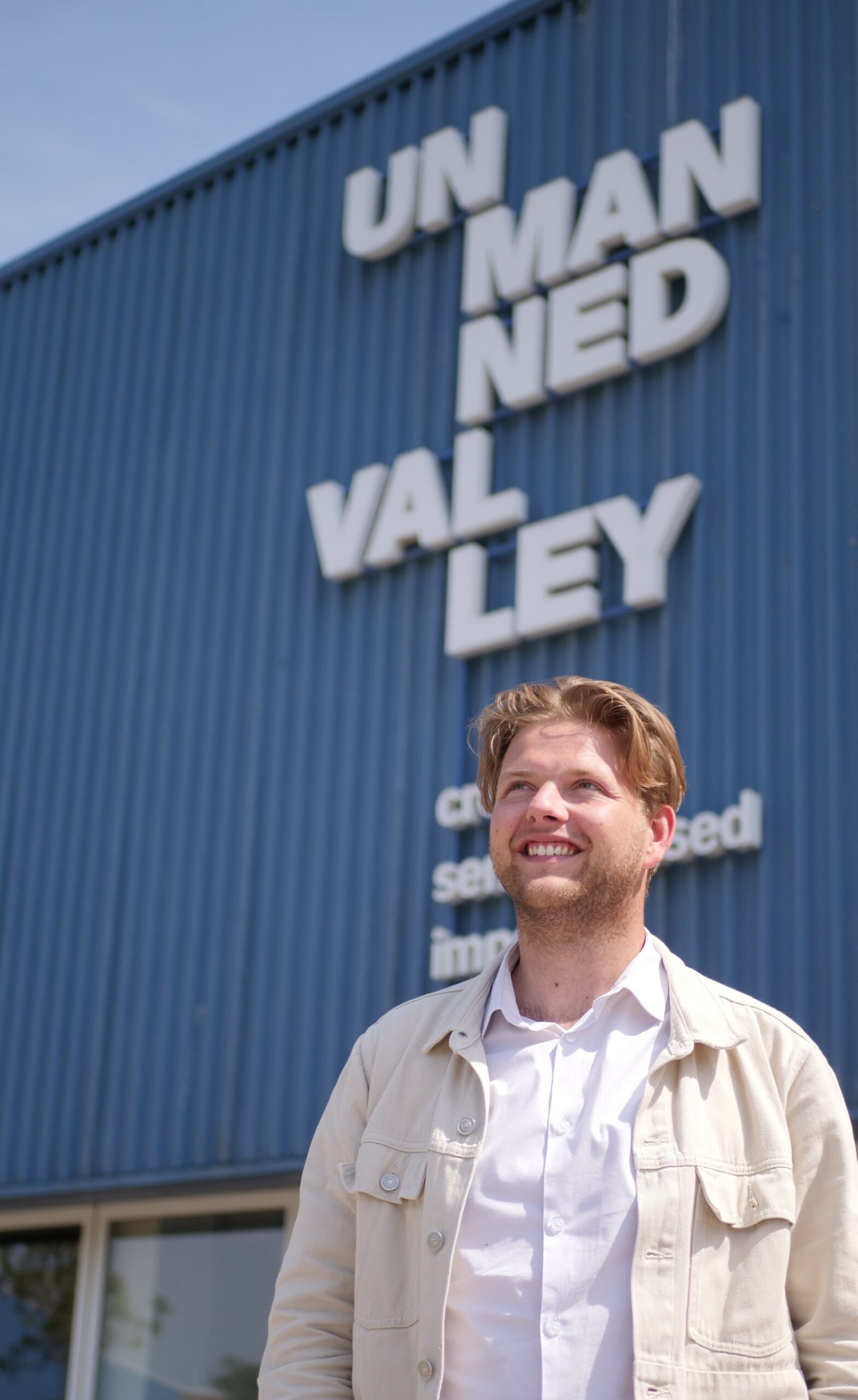 Corridor to the sea

From his office, De Vries looks out over the former runway, which now serves as a test field (500x500x120 metres). “We can do unlimited tests here. We do not have to share the airspace like other airports. That is our biggest asset.” It is one of UMV’s many strengths. Later this year, De Vries expects to receive permission for the coveted corridor to the sea, which will allow drones to travel to and from the North Sea – another unique development in the Netherlands.

The field lab focuses on everything to do with unmanned, autonomous systems, whether on land, at sea or in the air. Most of the activity is currently for the account of drone companies. Not surprising, says De Vries, given the location on a former airfield. “We can do anything that flies.”

“We can do unlimited tests here. We do not have to share the airspace like other airports. That is our biggest asset.”

But if you look further, you will see that the field lab is much more than that. The 5G masts, for example, are needed to process the data collected by the drones. Thanks to 5G, this can be done in real time. One of the companies that benefits greatly from this is Atmos, which builds drones for regional mapping and has moved from Delft to Unmanned Valley.

De Vries is also working on plans for facilities for hydrogen-fuelled drones, an acoustic measurement lab, and he wants to set up a simulation platform for drone stations. “In the future, all these drones will need places to load and unload, similar to petrol stations on motorways. We can simulate these drone stations perfectly here.”

The growth in the number of start-ups has also led UMV to work on an incubator programme, and so ensure that start-ups are also taken care of. Last but not least, the field lab will soon have its own air traffic controllers. As the owner of the land and buildings, the Central Government Real Estate Agency currently still takes care of this.

Anyone who stands outside on the huge test field will soon understand why traffic controllers are needed. On peak days, seven drones will use the test field simultaneously for various test flights, and the interest is only increasing, says De Vries. “We can expand one more wing of our business centre, but then it will be at maximum capacity.”

Innovation and history – it all comes together perfectly at Unmanned Valley. The pioneering spirit of Albert Plesman resonates in the young entrepreneurs who develop and test ground-breaking innovations in the field of unmanned aviation. And in the field lab itself. “Pioneering is great fun,” says De Vries with a wink. “Especially when it works.”

This article is part of a series 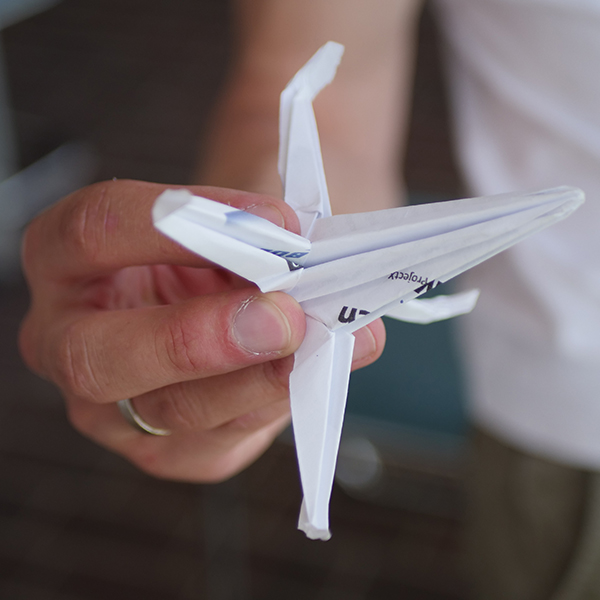 Read about the makerspace 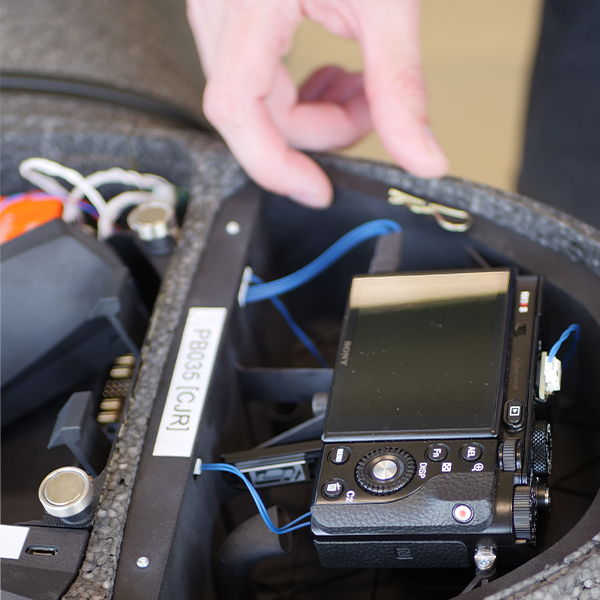 Read about the
scale-up Atmos