Dutch startup QuantWare launches the world’s first commercially available superconducting processor for quantum computers (QPU). The superconducting quantum processor is available ‘off the shelf’, a unique development with the potential to significantly accelerate the quantum computing revolution. “By making QPUs more available, we will speed up the development of practical quantum-driven solutions to the world’s biggest problems.”

Quantum technology promises to considerably expand the amount of data computers are able to process and is therefore regarded as a game changing development with implications in various fields as AI, medicine, business intelligence, and cybersecurity. Previously unsolvable problems can be solved using the unparalleled capacity and speed of quantum computers.

Accelerate quantum-driven solutions
However, in order to achieve that milestone of “Quantum Advantage”, one needs quantum computers that are sufficiently large. Therefore, large tech companies as IBM and Google are working on scaling up their superconducting processors that are not available to outside entities. QuantWare is the first party that makes large processors in productised form available to all companies and researchers; a development that is expected to have an accelerating effect on the future of quantum computation.

“The race towards useful quantum computation is heating up, but still reserved to a small group of companies. QuantWare’s mission is to accelerate the advent of the quantum computer”, says QuantWare co-founder Alessandro Bruno. “By making QPUs more available, we will speed up the development of practical quantum-driven solutions to the world’s biggest problems.”

“Our Soprano QPU is what the Intel 4004 was for the semiconductor business, says Rijlaarsdam. “Superconducting qubits are highly customisable, easy to control and very scalable. That practicality makes superconducting QPUs by far the most likely candidate for near-term quantum computing applications.” 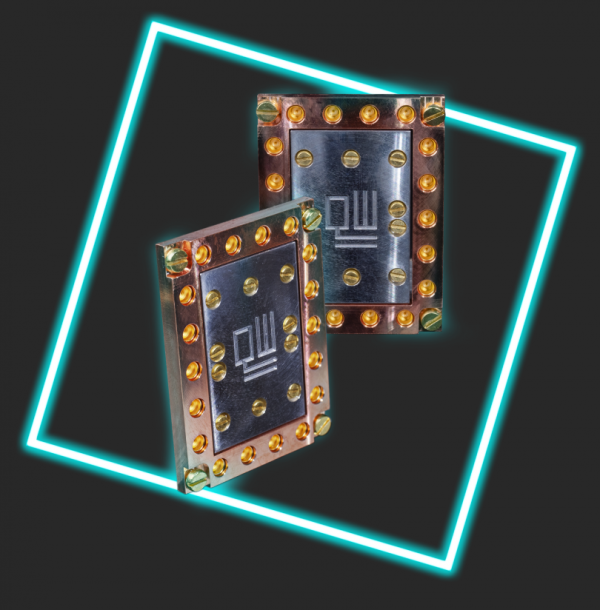 A “Soprano” QPU from QuantWare

Deep tech
As a spin-off of the TU Delft this deep-tech startup strengthens the innovative quantum ecosystem of companies, investors and researchers around the TU Delft. To bring all parties together, the recently announced House of Quantum, will function as a joined location and place to meet up for the ecosystem and it will facilitate all parties to create the quantum technologies and businesses of tomorrow.

The company recently closed their pre-seed funding round, meaning the company has now raised €950,000. Using this capital, they plan on quickly expanding their team and upgrading their processors towards larger qubit numbers. They also plan on expanding their fabrication capabilities and partnerships. The company is already looking for new facilities, as they expect to outgrow their current building within months.