To make plastic from petroleum, a lot of energy and petroleum are needed, which leads to a significant contribution to CO2 emissions. Jules Rombouts and Harman Korte felt it could (and should) be done different. With Nature’s Principles, they are working on a new technique to make up to 30% cheaper, recyclable polylactic acid (PLA) plastic. Not with petroleum, but with sugar beets. What is their secret, and how do they plan to beat plastic?

In 2017, Harman and Jules discovered something interesting. In traditional microbiological fermentations you ferment with one specific pre-selected micro-organism – a pure culture. Consider, for example, making yogurt, where you add lactic acid bacteria to milk after pasteurization. On the other hand, there are “undefined mixed cultures” – open systems in which all kinds of different micro-organisms work against each other and together. Jules: “Think of how we are making biogas. You dump organic waste in a reactor, and biogas comes out. So we thought: could you not also make a specific lactic acid for plastic in this way? And can we possibly compete price-wise with other PLA, or even plastic made from petroleum? ”

Polylactic acid: too expensive to compete with 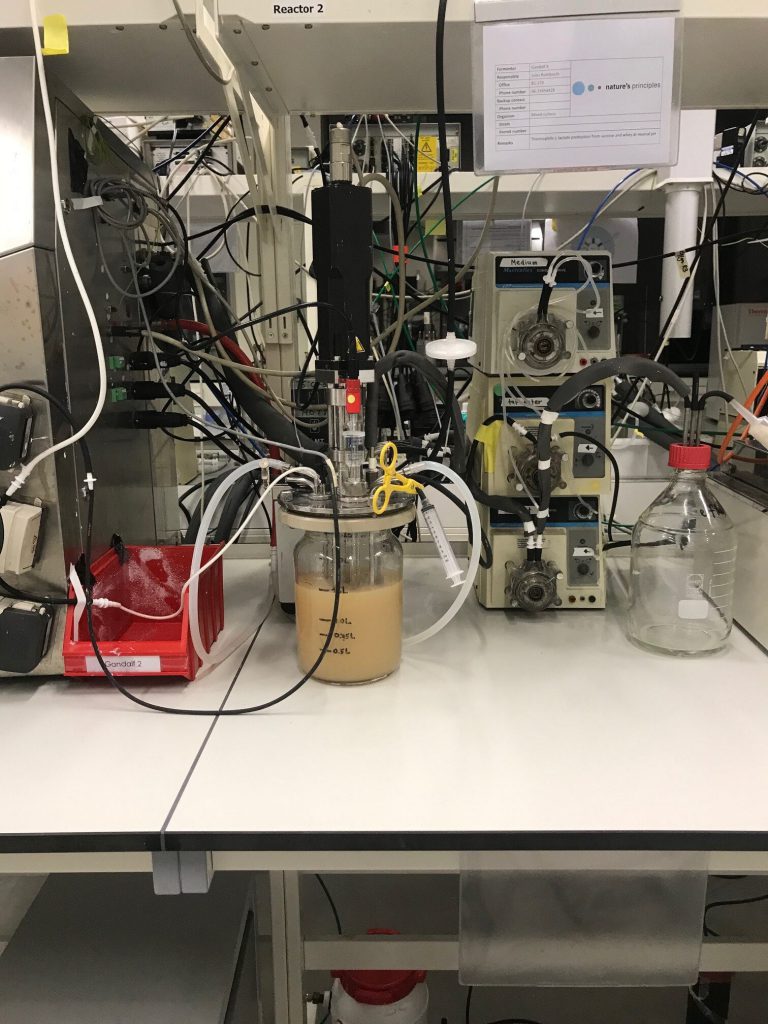 Petroleum plastic is immensely popular: thanks to low oil prices and the enormous scale of production processes, it is a cheaper raw material to work with. Jules explains that it is difficult to compete for other types of plastic, such as bioplastics: “Although the price of PLA has already dropped significantly, polylactic acid plastics are still almost twice as expensive as regular plastic. There is a small group of customers who are willing to pay this higher price. But the bigger players are not going to pay twice as much for their resources. Our mission is to produce about 30% below the current going price of PLA. ”

The potential market for PLA covers approximately 50-60% of the current total consumer plastics market. Jules sums up the advantages: “per kilo of petroleum for plastic you emit an average of 5 kilos of CO2. PLA, on the other hand, is CO2 negative, during production you store CO2, which is only released during incineration or fermentation. There is also a (geo) political aspect to PLA: you don’t need petroleum or natural gas to make this type of plastic. That means you are not dependent on countries that produce oil or gas. ”

The sugar beet as a secret weapon

A key role in Nature’s Principles plans is to convert carbohydrates into lactic acid. “The price of sugar largely drives the price of lactic acid. Lactic acid now costs about €900 to €1200 per ton. In our process we do not work with refined sugar, but with raw sugar beets. This way we can produce a ton of lactic acid for about €600 to €650. We have a slightly lower yield in the fermentation process, but we work with a much cheaper raw material. We can compete with that. ”

Suppose that in this way we would have to provide the whole world with just as much plastic as we use in the west. That is about 100 kilos per year. Then you only need 1 to 2% of the world’s agricultural land.

By working with raw sugar beet as a raw material, Nature’s Principles bypass the sterilization and refining of raw materials: expensive processes that cost a lot of energy and therefore money. Jules and Harman work with a company that cheaply converts sugar beets into a suspension and this is where the process of Nature’s Principles comes into play. A liquid is made from this suspension, which enters the fermentation phase. With the classic lactic acid production method you run into a problem here, Jules explains: “If you sterilize the juice, you get caramel syrup. Filtering is also not an option: the small particles would clog microfilters very quickly. And UV sterilization costs a lot of energy and is also not easy to carry out. As a result, this raw material is actually not suitable for use by the current industry methods. With our method, in which we are able to convert 70-80% of the sugars from those raw sugar beets into the required L-lactic acid to make PLA, we unlock sugar beets as a suitable raw material.”

The approach of Nature’s Principles is radically different from those used by other producers of lactic acid and PLA. Jules: “They work with refined sugar or sugar syrup as a raw material. Our reasoning is that you prefer to work with a crop that people cannot eat themselves. Suppose that in this way we would have to provide the whole world with just as much plastic as we use in the west. That is about 100 kilos per year. Then you only need 1 to 2% of the world’s agricultural land. We are also working on using the sugar beet pulp that remains in the process as an ingredient for food products, for example to make breakfast cereals or meat substitutes. So you can make plastic and food together. ”

Missionaries with an unconventional message

Jules laughs. “I’m kind of preaching the gospel, right? When we talk to existing companies or pitch our idea, we often hear that we are very unconventional. “That’s not going to work, that’s not going to be possible, that’s not how it should be, it’s not safe, this is not how it works” – we have all heard that. Of course we have to be realistic, we are not 100% sure if all our ideas are feasible. But we also see an enormous opportunity here. We get our motivation from that. Nature’s Principles was featured three times in April in the RTLZ programme ‘How it’s done’ and is working on the lab validation for the upscaling of a first pilot to realize the first 100 kilos of product. After that, the company wants to look for a good location for a semi-commercial production trial. If this goes well, the first full-scale factory in Europe will be operational in 7 years. “But first improve our fermentation process even further!”